Written on the Wind - part one

.
Hooray! The first part of my new serial for Woman's Weekly is out this week! 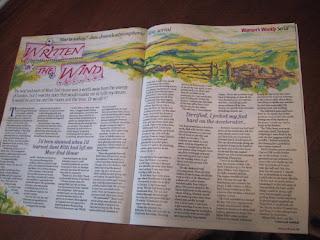 Written on the Wind is about Annie Farrow - an artist who makes beautiful, stylised mobiles. Her dream is to create larger installations whilst supporting herself with her artwork, but this seems unlikely until her great aunt leaves her a house on the edge of the North Yorkshire moors. 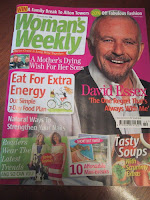 However, Annie discovers that the wild seclusion of Moor End House doesn't quite provide the uncomplicated lifestyle that she'd thought it would.

(And yes that IS David Essex on the cover)

Email ThisBlogThis!Share to TwitterShare to FacebookShare to Pinterest
Labels: serials, Written on the Wind

Today I am being interviewed over at the Romantic Novelists' Association blog. See you there!
.
Posted by Jan Jones at 15:05 No comments:

The Kydd Inheritance shortlisted for the RoNA Rose 2012!

The news is now out and I am so, so, so thrilled to be able to announce that I have been shortlisted for the Romantic Novelists' Association awards for the third year running!

This year, the awards have a new logo and a new name: the RoNAs. There are six awards being made - Contemporary, Epic, Historical, Romantic Comedy, Young Adult and the RoNA Rose for category and hardback-only romance.

The Kydd Inheritance is a Regency love story set amidst secrets and skullduggery. Nell Kydd has to outwit her dangerously creepy uncle, reinstate her dangerously adventurous brother and come to terms with his dangerously attractive friend, Hugo Derringer.

The winners in each category will be announced at a wonderfully posh "Bubbly and Bites" event at One Whitehall Place on Monday 5th March. It would be a terrible waste not to buy a new frock for it, yes?


I'm delighted to see so many of my friends on the 2012 shortlists. The full lists are as follows:

Further information can be found at the RoNA Awards site and the Romantic Novelists' Association.