.
Quick blog post today to remind myself to do it more regularly.

Lovely presentation yesterday at the Theatre Royal, Bury St Edmunds on the famous Mr McCready's four-day visit to the theatre back in 1826. There were tiny scenes throughout capturing the goings on at the theatre (he was rather forthright on the subject of provincial acting, but didn't object to trousering the profits from the plays), and also a talk on special effects, Georgian style. 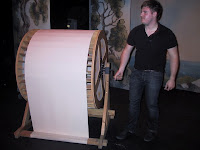 This is a reproduction wind machine - a beautiful thing made of wood and canvas. When I turned the handle it sounded rather like a sick banshee, but in the hands of a professional it produced everything from a gentle zephyr to a full-blown storm. There was also a thunder sheet. Interestingly, the term "stealing my thunder" came from an actor whose own tempestuous play folded, was replaced by Macbeth complete with storm scene, and the actor complained very loudly that the Scottish play had - quite literally - stolen his thunder. 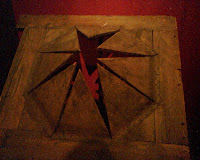 And this is a star-trap for those beloved sudden appearances. Or occasionally not - they were famed for often being real star traps, with the actor being pinioned firmly around their middle! 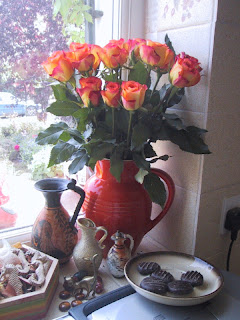 The 4th of June 2010 would have been my mother's 80th birthday. Five years ago she wasn't very well, so instead of us all going out, daughter and I took her up a proper birthday tea with scones, thin crustless sandwiches and chocolate birthday cake with candles (but not 75 of them!). It was a faff, but I'm so glad we made the effort because she really enjoyed it and it was the last one she had.

Since then, the 4th June has always been a bit of an odd day, but this year especially so, perhaps because it is so sunny and plain nice outside, which it isn't always at this time of year. Mind you, with the best will in the world, no one would ever have described my mother as anything but a glass-half-empty person, so it would probably have been too hot for her and she'd have had me scurrying around watering all the plants.

Still, she loved flowers and she dearly loved treats, so I bought these in Waitrose for her this morning. I would have got her favourite freesias, but her voice in my head (anyone else get that?) pointed out that the roses were 25% extra free and the orangey-yellow would look much nicer in my kitchen than pale purple. That was the other thing about Mum, she was incapable of resisting a bargain and she would always buy something for me or her grandchildren rather than herself.

In the spirit of which, I also bought her favourite chocolate gingers to nibble (2 bags for £4; I think she'd have approved) while I read the latest Medical Romance - her favourite reading matter - by my good friend Kate Hardy. (It's Neurosurgeon... and Mum and she'd definitely have loved it.)

So, Happy 80th Birthday. I hope it's just the right temperature for you up there.