What Mary Stewart Means To Me


It was the egret, flying out of the lemon-grove that started it.

This single sentence, the opening line from The Moonspinners

, sums up what Mary Stewart means to me. The to-die-for sense of place expressed in just a few skilful words. The delicious hint of adventure and romance. The promise of a glorious few hours, curled up with one of my favourite authors, oblivious to the outside world. I read Mary Stewart's books over and over again, and every time, I'm transported to that precious state where nothing else matters except what I am reading.

Mary Stewart wrote romantic suspense before the genre had a name. To me as a teenager her books were adventure mixed with love and sprinkled with humour and I didn't see how the combination could possibly be bettered. (This also held true for Georgette Heyer whom I discovered at roughly the same time.) Even now, I have only to think of any Mary Stewart book and I am there. The novels come as a whole package: sights, sounds, smells. To add to the immediacy, all but one are written in the first person, so when I experience the narrative, I do so from within the heroine's skin.

My first Mary Stewart novel was Airs Above the Ground

. I read it at age 12 or 13 and was hooked by her style and her voice. My all-time favourite is Touch Not the Cat

, an unashamed love story with a paranormal thread. But it is her Hellenic books - This Rough Magic

(1959) - that captured my heart all those years ago and caused me to fall in love both with her and with Greece. 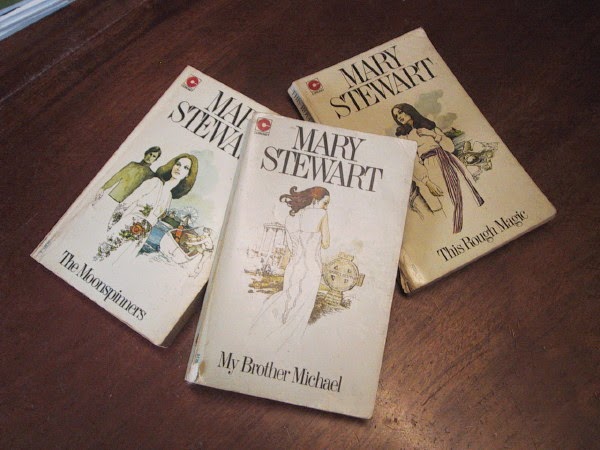 Nowadays, of course, everyone has been on holiday abroad, but at that time affordable foreign travel was in its infancy so the authors writing about Provence or Morocco or the many regions of Greece were opening their readers' eyes to a whole new world. Certainly that was how it worked for me. This Rough Magic is set on Corfu, The Moonspinners is based in Crete and My Brother Michael - perhaps the most starkly beautiful of all her books - takes place near Delphi in mainland Greece. In it the hero says, "Everyone has two countries: his own - and Greece", and such is Mary Stewart's skill that that is exactly how I felt on reading the books, despite never having been there. A lot later I went to Greece myself and felt at home from the moment of getting off the plane; the warm air, the bright curiosity of strangers, the terrain, the voices - it was all so much as I expected that I ached with the joy of being there.

The majority of Mary Stewart's romantic suspense novels can be loosely described as the story of a young woman stumbling on adventure and finding romance along the way. The landscape, whether at home or abroad, is always part of the story. I love the way she arranges darkness and humour, description and dialogue, passion and the commonplace, into a perfect whole. Light reading these books may be, but she isn't afraid of strong emotion: Nine Coaches Waiting

, for example, contains some heartbreaking moments of self-sacrifice.

It is My Brother Michael that moved me the most, however. Pure chance causes Camilla Haven to deliver a hire car to Simon Lester, who is in Delphi to discover the truth about his brother Michael's death towards the end of World War II. Mary Stewart described the book as her love affair with Greece. Her affection and respect for the country and its people shines through and imprints itself indelibly on the consciousness. That was the first point. The second was that My Brother Michael introduced me to John Donne. What a thing to do to an impressionable teenager besotted with words and their rhythms! In particular Mary Stewart quotes Donne's 'No man is an island' passage and uses it to describe the hero. And he is the final reason that I fell in love with this book. Simon Lester. He is tough, fanciable, understated - and cares deeply. He is 'involved in mankind' as a matter of course. The sort of man a girl yearns to know is out there. The sort who spoils her for all others. Aragorn for the modern world.

Whether I would feel the same way now on finding Mary Stewart for the first time I don't know. I always think we are shaped by our reading, so I am the person I am because of discovering her in my teens. The fact remains that for me she has that rare gift - page-turning quality by the bagful. The best thing about being so familiar with her books is that now I can take my time enjoying each page without the what-happens-next need to rush on.

The blog post above was one I contributed to Norman Geras's wonderfully wide ranging NORMBLOG. Many thanks to Adele Geras for agreeing to my republishing it here.

I was incredibly sad to learn this week of Mary Stewart's death. As this post shows, I owe her a great deal, which is one reason that I dedicated FAIRLIGHTS

to her. The other reason, of course, is simply that her writing is quite, quite awesome.
.

There are only four questions, so here goes:

What am I working on?

In theory, I am working my way through editing and extending all my magazine serials, and then publishing them on Amazon Kindle. However, having just vastly expanded my romantic suspense Fairlights to the length it always should have been, a couple of spinoffs are waving at me, begging to be written. This happens to me A LOT. A secondary character in one book becomes so interesting, with such a lot of hidden backstory, that they turn into the subject of the next book. Generally this happens in sequence, but one of the Fairlights spinoffs will be a little different. When I was originally describing the house, I wrote a throwaway line of explanation ... which has since become a fully fledged storyline! So I am currently revisiting a previous genre of mine and writing Ravell’s Luck: the Regency Fairlights story!

How do my stories differ from others in genre? 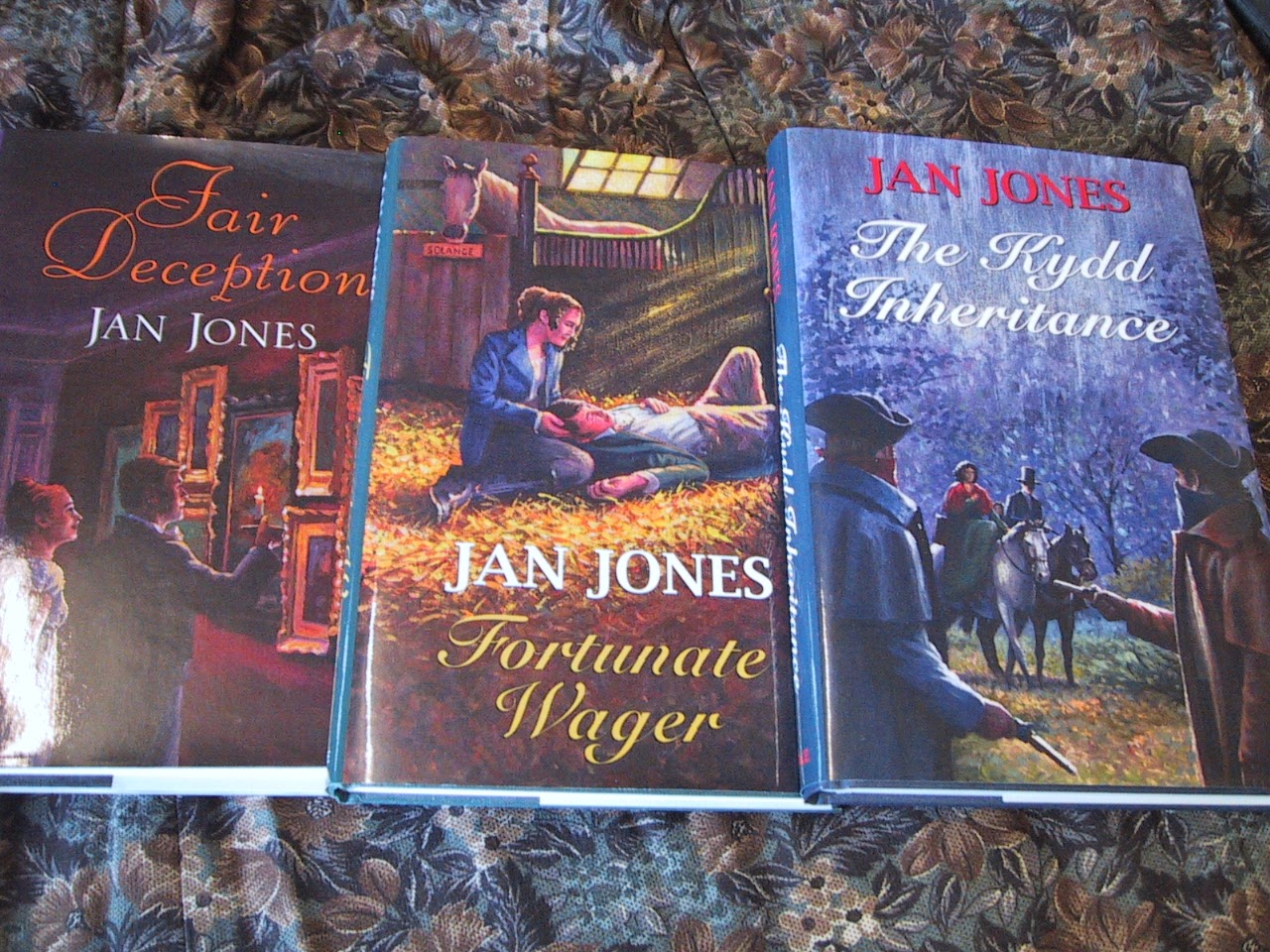 Everybody writes with their own voice. Every writer has an idea of what they want to include in their story. I write in several genres (contemporary, romantic suspense, Regency, cosy mysteries), but whichever one it is, I like to think that my stories are the sort of thing that could happen to anyone - even the slightly paranormal elements.

Why do I write?

Most people have some sort of creative urge. We need the satisfaction of making something that wasn’t there before. It could be growing plants, knitting or writing computer programs. It could be painting, playing music, inventing sudoko grids, doing cross stitch or even tackling double-entry bookkeeping and seeing all the numbers adding up the way they should at the end. I feel very strongly that not doing something you have a talent for is a waste. It frets us, niggles at our minds. People should play to their strengths because it’s why we have them. I can write, I can entertain, so I do. Also it significantly reduces the likelihood of my laying waste to a large swathe of my surroundings in frustration.

How does my writing process work? 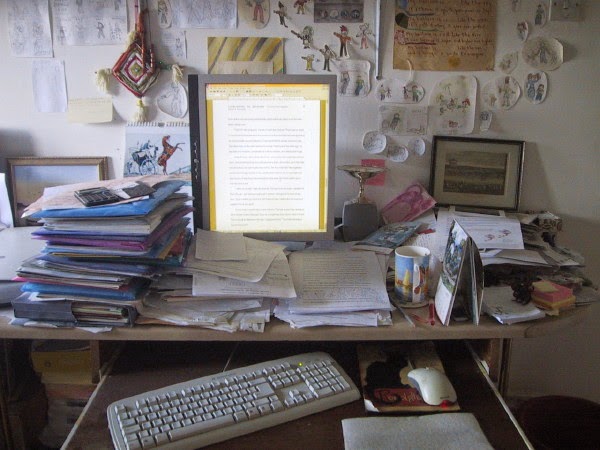 Each book starts with an idea. A phrase, perhaps, or a character. Maybe a line of dialogue or a setting. That idea rolls around gently in my head, gathering new bits and pieces. I often scribble it all down on paper, stream-of-consciousness style, over and over again before it begins to make sense and I have a story. By the time I actually start writing I will usually know the beginning and the end. I’ll also know my characters and a few hazy milestones along the way. The rest often surprises me - and I wouldn’t have it any other way.

The hard part is writing the story. I write best at night in the early stages of a book, when everything is quiet and there are no distractions. I then go over it the next day, and add some more. I repeat the process until I’m only changing the odd word here and there,
then I move on to the next section. It really is two steps back and three steps forward the whole time, but hopefully the manuscript is getting smoother and more cohesive with every iteration.

After it is finished, of course, I have to let people read it - and then the editing starts all over again!


So, that's my writing process. Next, I am passing the baton to the very talented writer Beryl Kingston. Beryl doesn't have a blog of her own, so she is being hosted by the equally splendid Jenny Haddon.
.
Posted by Jan Jones at 10:26 8 comments: