Years and years ago, I wrote a short story based around the idea of a Heavenly Operations room. I've always thought, in a vague way, that there was scope for a whole series there, but never got around to doing anything about it. For the last week, however, I've been feeling more and more strongly that I have to write another one. Not just in an ooh-that-would-be-a-good-story sort of way, but a proper jab in the ribs. I knew what it would be about. I knew it would only be a short. What I didn't know was whether I ought to. I didn't want people to think I was trivialising something serious.

This morning, waiting in the doctor's surgery, I got out my kindle to read and damn near FELT my hand being slapped and the instruction "Write the story!" being zapped into my mind. So I opened Notes on my phone and wrote 600 words that it turned out had been in my head all along.

We all find relief in different ways. This has eased mine because it is what I believe, even though it can only be pure fiction.

“So, it’s not a mistake then?”  A Heavenly Ops story by Jan Jones

“So, it’s not a mistake then?”
Miriam gave the smartly dressed woman in front of the desk a brief smile. “No mistake, no. Or, only in that you should have been here quite some time ago.”
“Really?” The woman consulted her iPad with a frown. She tapped something into it and turned back to Miriam. “In what way?”
“You were due to arrive earlier, but you’ve always managed to evade it. All those near misses dodging the London traffic. That time you stopped another hour at the party and didn’t disturb the burglars, thus avoiding giving yourself a heart attack. And this last scare - most people don’t even do the routine tests, let alone do them early enough to catch life‑threatening conditions in the early stages.” Miriam stopped, aware that she was starting to sound aggrieved.
The woman was giving her her full attention now. “You arranged this?”
“Of course not,” said Miriam. “That would be highly immoral. Nobody has a fixed term, merely points at which things might happen. But here in Ops we do keep an eye on the potential-arrivals list for useful individuals. Organised people, for example. Efficient.” Her gaze travelled to the waiting room where hundreds of comfy chairs were thoughtfully placed in front of hundreds of daytime tv screens. “Intelligent.”
“You headhunt the living?” The woman’s voice was filled with outrage.
“No, but we do log them. Oh, come on, think about it. You were a top agent. Formidable woman, exemplary preparation before every killer deal. You managed all that without doing any research?”
The newest arrival inclined her head. “You have a point. So, no mistake. I'm here for good. Where do I live?”
Miriam shrugged. “In broad terms, wherever you expect to.”
The woman raised her eyebrows. “You mean I walk out of here, catch the tube to my stop and there will be my apartment waiting for me, just as I left it last night?”
“Essentially, yes. People see what they expect here. They get what they expect. One of the pointers that told me I was right in my preliminary assessment was that as soon as you walked through the door of Arrivals, you saw what I see.”
“Actually, that’s fascinating. So everyone lives where they expect to live... How does that even work?”
Miriam smiled. “Mr Escher sorted something out. We do have a considerable pool of talent up here. They also eat at their favourite restaurant or find new ones just as good, shop at their favourite supermarket, go to fabulous concerts...”
“Endless possibilities, in fact. Right,” the woman consulted her iPad, “ah, yes, finances. What is the monetary system?”
Miriam craned her neck to glimpse the screen. Had she been making a list of things she needed to find out, just in the Fast Transit lift? Which, incidentally, Miriam hadn’t even known existed until the door from it had opened next to her desk. “There isn’t one,” she said. “We run a sort of general heavenly credit scheme. People get what they expect anyway. The nicer you are, or the more useful you are, the easier it is for you to manipulate your expectation factor.”
“So, the more I do, the better the quality of Dom Perignon in my fridge?”
“Something like that, yes. You’ll work it out.”
“Tech support?”
“See our Mr Jobs if you have any problems. Bless him, he’s been busy since the moment he arrived.”
“Excellent. Well, I’ll settle in here first, then go home. Where’s my desk? Ah, I see it.” She walked over to a book-lined alcove with a desk, three screens, fridge, kettle and coffee-maker that Miriam knew, just knew, hadn’t been there two minutes ago.
“You,” she said with respect and deep satisfaction, “are one fast learner.” She reached into her own fridge and produced two chilled glasses and a misted bottle that gave a soft, expensive pop when opened. She handed one of the foaming glasses to her new colleague. “Welcome to the Heavenly Ops room, Blake.” 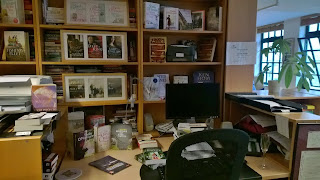 Oh Jan - I love that and so would Carole! xx (Judy Astley here - not sure how to do this unless I pick the anon option)

Glad you like it. I feel so much better having written it.

Fabulous Jan,
You were so right to write this and I think Carole would think so too. In fact I wouldn't be surprised to know that she had a hand in it!

That's wonderful, Jan! I did like Escher & Jobbs working away too. Carol would have topped up your fizz for this!

You are all far too nice x x x

Jan this is brilliant,

in my minds eye I can just see Carole doing just that!

Jan, this is so lovely. Funny and affectionate and very cleverly done. I'm so glad I read it. Thank you! (Jane Smith here, also being anon because I don't have the right accounts to use my real name.)

Brilliant, Jan. Everyone else has already said what I would - funny, affectionate and clever. Carole would/will love it.
(Jane Pollard - also anon due to insufficient accounts)

I am smiling and trying not to cry at the same time...loved it.

No gin? or is that for later. I love it and I am sure Carole did tell you to write it. I am sure there are many more people out there who will enjoy and appreciate this.

Thank you all. I wrote it for me because I had to, but then thought Carole's friends might appreciate it too.

I did feel a sense of peace when I'd finished, telling me I'd written it right.

Thanks Jan - I never knew or met Carole, and am only here because of your Twitter post. However, my dear friend Grace passed away last week, and I can just see her in your Ops Room. Thank you.

Thanks, Simon. Sympathy on your loss. Never gets easier.

This is fabulous, Jan. It's perfect. And it's very moving, too. xx

It is quite brilliant, and very comforting. Genius, Jan. I'm going to post the link to FAW, if you don't mind.

Thanks, Lesley. Don't mind you posting the link at all. I'm glad it is helping people come to terms with the loss

Absolutely perfect, Jan. I choose to believe that every word is true.
Jill Mansell. xx

Me too Jill - and if I post something on Carole's timeline, by mistake, it is because I still cannot believe that she is not there to reply or just 'like'. I loved it when she said she would 'like' my comment 20 times if she could when she was in hospital.

Thank you all. I'm really glad people like the story.

...with your Heavenly Ops...
HeeHee