Bored with sandwiches? Try something different at lunchtime - like going to a play!

At the Theatre Royal in Bury St Edmunds all this week, the Little Bear Theatre Company are putting on a compressed 50-minute version of the five act Georgian play A Bold Stroke for a Husband.


It was thoroughly enjoyable - a lot faster and more furious than Hannah Cowley intended, but just as funny and very accessible indeed. I did miss the leisurely setting of the scene and the asides to the audience which are a prominent feature of Georgian theatre, but as a cultural lunchbox, this stylish, snappy (and very clever) performance is hard to beat.

Well done all - I look forward to the next adaptation.
.
Posted by Jan Jones at 22:42 3 comments:

Back and forth - and on

First it was down to the Big Green Bookshop in Wood Green, not a million miles from where I grew up. I've followed these guys since they first conceived the idea of opening a bookshop, so it was smashing to meet them in person and not just exchange words over the ether. 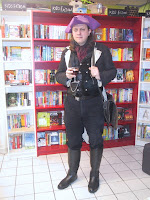 The evening was spent at a tweet-up organised by Scott Pack, designed to help the shop over a sticky patch. Wine, food, books, good company and a rather fine mobile bookseller - what's not to like?

Next morning I treated myself to a lovely ramble around where I spent my childhood. It's always a tiny bit worrying going back, but I needn't have worried. True, the primary school had been replaced by a much bigger building, and the large asphalt playground had been covered with play structures, divided play areas, and outdoor toys, but there were still happy kids all over the place and it was so colourful and joyous that it was impossible to look at it without smiling.

My road and those around it still seem to be the same safe streets they always were, even if two houses in three now have loft extensions and three out of four front lawns have been replaced by hard standing for cars.

The church where I spent so many freezing Sundays was the biggest surprise. I'd expected gentle decline - but it has expanded! The old pews have been replaced by stackable chairs to transform the nave into a vibrant, multi-use space. There are bright banners around, toys for children's sessions and a second hall and bigger kitchen built onto the side. The organ had wheezed its last, but in removing it they had discovered the most beautiful rose window. And the Lady Chapel is the same calm, traditional chapel that it always was. So lovely to find another instance of positive, thriving change. (Mind you, when they said they would contact me later as a source of archive memories, I felt just a tad ancient...) 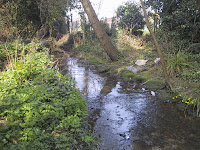 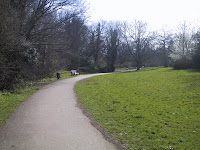 But the very best part of the trip for me was walking through the small park where I spent so much of my time when younger. And I discovered that the muddy path where we had always been able to get down to the brook and fish for tiddlers was still there, the brook itself was still unfenced, the shallow, pebble-bottomed water was still a glorious magnet for today's kids. Colour me very happy.

And after all that, it was time finally to head for Reading to celebrate the launch of my lovely friend Julie Cohen's book Getting Away With It. Masses of people in Reading Central Library drinking fizz, eating ice cream (you have to read the book to understand why) and cheering her on. Hope it sells gazillions, Julie! 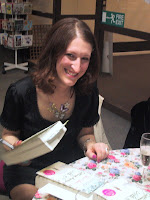 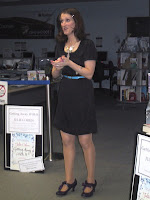 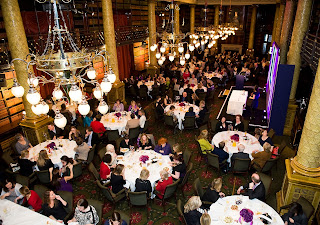 Just look at this room 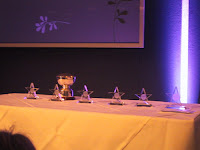 look at the Award Stars 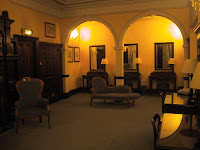 look at the Ladies ! 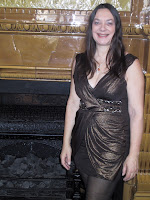 I arrived early and grabbed a photo opportunity by the fireplace in the Reading & Writing Room at One Whitehall Place. None too soon, because the room soon filled up with shortlisted books, authors, guests and champagne. 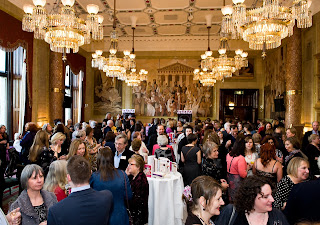 As with all RNA gatherings, masses of cheerful networking took place before we were called into the Gladstone Library for more champagne, canapés and the Awards announcements.

I didn't win the Love Story of the Year award, but I was thrilled that my lovely friend and Cambridge-Chapter-mate Louise Allen did for her fabulous historical romance The Piratical Miss Ravenhurst. And then another great friend Elizabeth Chadwick won the Historical Novel prize and a third, Jill Mansell, won the Romantic Comedy prize! I don't think it will be any great surprise to learn that more champagne appeared roundabout then...

The full list is:
RNA Love Story of the Year: The Piratical Miss Ravenhurst by Louise Allen
RNA Historical Novel Prize: To Defy A King by Elizabeth Chadwick
RNA Romantic Comedy Prize: Take A Chance On Me by Jill Mansell
RNA Romantic Novel of the Year: The Last Letter From Your Lover by Jojo Moyes
Lifetime Achievement Stars went to Penny Jordan and Josephine Cox

Email ThisBlogThis!Share to TwitterShare to FacebookShare to Pinterest
Labels: awards, Love Story of the Year, RNA

World Book Night ... and beyond 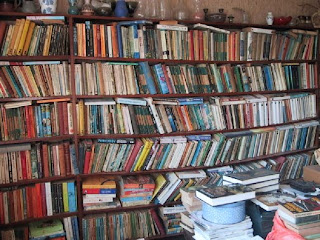 Everyone had a great time, and why shouldn’t they? Books are enjoyable. Books make you feel better. Books can make you think, they can educate you, they can take you to faraway places and let you escape for a space.

So why don’t we buy more?

"Oh, because they are expensive."

So if it isn’t cost, what is it? Could it be because a book is visible evidence forever that you have spent money ENJOYING YOURSELF?

Think about it. Tights get ladders and holes and are thrown away. Earrings are small and easily hidden in the secret earring stash (everyone has a secret earring stash, right?). Wine is even better - it gets flushed through the alimentary system within 24 hrs and the bottle consigned to the recycling bin.

Is that it? Well, there’s an easy solution - borrow a book from the library. You can return the evidence as soon as you’ve read it. Or treat a book as a throwaway: put it in the recycling bin along with your daily paper.

But maybe, just maybe, we should nail our colours to the mast. Stand up straight and tall and announce to the world that
WE LOVE READING!

There really isn’t anything wrong with it, you know.
.
Posted by Jan Jones at 12:33 8 comments:

.
Eeek, it's nearly the RNA Pure Passion Awards night and I DO NOT have an approaching cold. I am telling my throat that it does not have that incipient tickle signalling full-on loss-of-voice, my glands are merely over-excited, my nose is not running, and my slight headache has simply been caused by the adverse weather.

However, just to be on the safe side I am carrying the Big Box of Tissues around with me and am mainlining tea with a side-order of paracetamol.

Because Monday sees a big sparkly Romantic Novelists' Association party and the announcement of the Romantic Novel of the Year, the Love Story of the Year, the RNA Historical Prize and the RNA Romantic Comedy prize. Nothing is going to stop me dressing up, going to the Gladstone Library at One Whitehall Place with my pals, celebrating being shortlisted and cheering on all the winners!