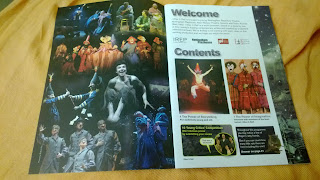 .
Wow, that was an experience! I'm just back from watching an adaptation of Philip Pullman's I Was A Rat at the Theatre Royal in Bury St Edmunds - and I'm worn out! The cast were extraordinarily good - all of them playing multiple parts with impeccable timing and zero time to change.

The boy Roger - played by Fox Jackson-Keen who I wasn't in the least surprised to learn once played Billy Elliot - was fabulous. He had me aching with laughter one minute and all scrunched up ready to cry the next. I think the whole theatre breathed a sigh of relief when things came good for him at the end.

The colours, the lighting, the energy, the masks, the sheer cleverness - it was a fast-paced kaleidoscope of a production with some pertinant messages about society - and very well worth seeing indeed.

(But if you aren't keen on circuses - especially clown faces - you might want to choose that scene to nip out for a comfort break. Don't say I didn't warn you.)

I'm now drinking tea and returning to the real world. And reflecting.

[The show is on until Saturday 20th April, then off on its travels around the country. www.iwasarat.co.uk ]
.