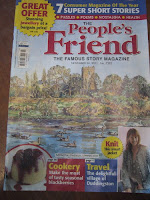 The final part of Penny Plain is now out. All the loose ends get identified and tidied away neatly, just as they should.

I'm going to miss seeing the illustrations each week 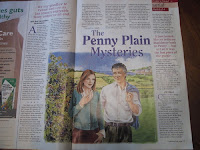 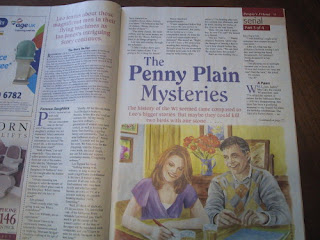 The story behind Part Three of this year's Penny Plain Mysteries is one of those  serendipitous coincidences that we are told never to use in our writing, because no one would believe it. But this one DID happen, so I did use it - albeit in a fictitious manner.

Earlier this year, when I was writing the second series of Penny Plain, I received an email through my website from Betty, now living in Canada, to say that she always had People's Friend sent to her from the UK and had thoroughly enjoyed the first Penny Plain story.

She went on to say that she had particularly liked the unusual jigsaw-code-breaking strand, and mentioned that back in the 1950s she had worked on aircraft crash data, trying to establish the weak points in the new aeroplanes then being developed.

At which point I leapt off my chair shouting "Yes, yes, yes!" and "FABULOUS!" and "I don't believe it!" Because - as I immediately emailed back to her - I was at that very moment writing the new series of Penny Plain which included a mysteriously crashed plane from the 1950s! 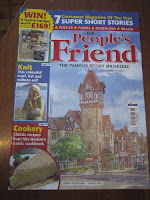 We have since kept up a regular email correspondance, and I was so grateful for the easiest research ever, that I wrote Betty - in very fictionalised form - into this week's episode. 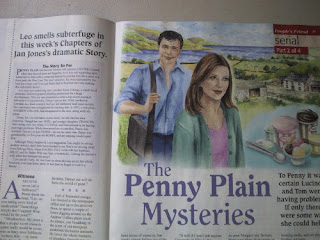 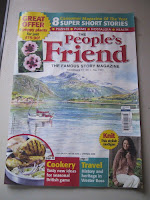 The second part of The Penny Plain Mysteries is out today. This episode centres on the rather worrying goings on at Fellside Farm. I love the way the illustrator has captured a typical Lake District farm with the hills in the background.


And the ice cream? What does that have to do with the story? You'll never know unless you buy the issue.
Posted by Jan Jones at 11:11 No comments:

.
Where is the year going? I delivered the second Penny Plain Mysteries serial back in the spring and thought of the November publication date as months away. Which it was, of course. So I forgot about it and got on with other projects. 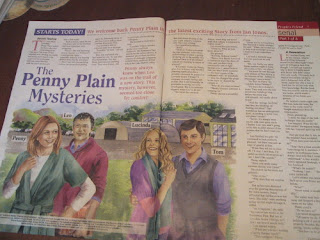 So imagine my surprise when I opened up the first page of this week's People's Friend to find this! (Several other people in my aisle of the supermarket were likewise surprised. One lady rushed over thinking I was having a minor heart attack.)

It's the first time I'd seen the illustration and I love the way the artist (Ruth Blair) has got the characters just right. 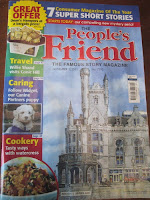 It's another four part serial involving - oh, let me see - 1950s aircraft, the Women's Institute... and ice cream. And an overarching mystery and a few other bits and pieces as well.

You'll have to buy it to find out. Just like the lady in the supermarket.
.
Posted by Jan Jones at 12:46 7 comments: