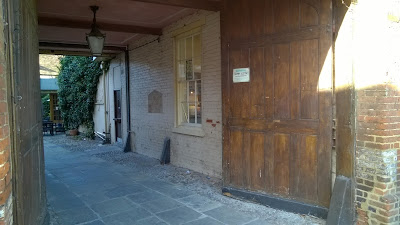 Sorry for the recent silence. I'm busy writing the fifth in my Newmarket Regency series, which I'd thought was going to be a stand-alone, but which my idiot brain suddenly had the bright idea of turning into the first of a new set of four (maybe) books set in both Newmarket and London. It was a little like walking into an inn courtyard and discovering an entire new house lurking around the corner.

As this brainstorm happened a third of the way into the writing, it necessitated a fairly lengthy and somewhat panic-struck reappraisal of what was and wasn't going into the book. Also how I would finish it off as a stand-alone, while still leaving room for the other three.

Confused? Yes, me too. Pretty sure all will be well though. Fairly pretty sure.

This book is called A Rational Proposal and will hopefully be out next month. I'm still thinking about covers, but here's a tiny snippet from the opening page.

Miss Verity Bowman, undoubtedly by design, was looking particularly fetching, framed in the window seat of the dower house wearing a demure black mourning gown. Only the cut of the material and the subtle sheen of the satin and perhaps the double row of tiny black buttons gave away the fact that it had come from one of the more exclusive establishments on Bond Street.
Charles Congreve, invited to sit down and be comfortable, appreciated the picture she presented, fully understood why her uncle had made her his heir, and desired nothing more than to strangle the pair of them. Sadly, there was little to be gained in strangling a man who had departed this earth just ten days since. In addition, the legal brotherhood tended to look askance at those of their members who took to throttling clients. Which, he was very much afraid, Verity was about to become.
Unaware of his less-than-affable thoughts, Verity smiled warmly as he took a seat. “Charles, how lovely, such an age since we have seen you. Mama and I are so glad it is you dealing with this sad business, though I do hope nothing very dreadful has happened to poor Mr Tweedie?”
Verity had happened to poor Mr Tweedie. Charles's senior partner had taken one appalled look at the codicil appended to Admiral Harrington's will (a document that had been perfectly sound in wind and limb when it had left his own chambers), made an astringent remark about amateur notaries in Newmarket who didn’t have the wit to know better, and announced himself to be at a delicate stage with several cases, too much so to travel into Suffolk to undertake the process of winding up the late admiral's affairs. Not that there would be any, he'd added as an aside, the admiral being a very clean-living gentleman. Just the small weakness when it came to the turf. He was confident Charles would manage.
“Thank you,” Charles had replied, feeling anything but grateful. “You have recollected Miss Bowman is my mother’s goddaughter and a particular friend of my sister?”
Mr Tweedie had looked at him over the rim of his spectacles. “Naturally, I have remembered. A family attorney never forgets anything. Nor, as I am sure I do not need to remind you, does he allow personal considerations to influence his judgement. I repeat, I repose complete confidence in whatever decisions you might find yourself making. You had best leave directly after the funeral.”
So now Charles murmured his partner’s excuses about having a great deal of urgent work, was pressed to take tea and macaroons by mother and daughter, and his portmanteau was carried up to a guest bedroom just as if he was an invited visitor and not a common attorney. And all he could think of was how far Verity’s intelligent brown eyes were going to widen when he broke the terms of Admiral Harrington’s will to her. And then how far they would narrow. And how he had rarely, if ever, managed to get the upper hand of her in all their dealings together.