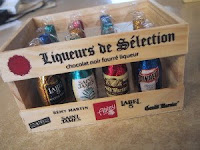 Due to the unaccountable absence of any liqueur chocolates in either my birthday bag or under the tree, I felt impelled to visit Waitrose this morning and browse the sale bay. (That and the fact that we only had an inch of milk left in the fridge.)

Have now spent another £2 of my birthday money and feel nicely mollified. There were bigger boxes, but I do love these miniature chocolate bottles with an appreciable amount of liquid inside.

So, what didn't you get this Christmas and what are you going to do about it?
.
Posted by Jan Jones at 12:19

Email ThisBlogThis!Share to TwitterShare to FacebookShare to Pinterest
Labels: Christmas

I didn't get a pony!

I didn't get padded coathangers. Every year I say I'd like some but no-one believes me except my mate Mish who ALWAYS gets them but doesn't like them so sends them on to me!

I didn't get Richard Armitage. And I can't find him in the sales either.

I did get some yummy chocolates, but someone let Demon Puppy into the room next morning and she ate them, wrapping and all (I hadn't even taken off the cellophane!).

I also got some pyjamas I wanted, but the strap broke on the cami-style top, so I returned it...to find they're now in the sale, there's no more of my size, and I can't get them online either!

So, if anyone has a spare Richard Armitage, some Lindt chocolates and a M&S pyjama top they don't want, you know where I live (well, where I hang out on Facebook, anyway).

I didn't get Richard Armitage, but was lucky enough to dream about him once this week.

I did get some lovely boots though and lots of other fun things.

oooh I didn't get a single book! Not one! It's unheard of I tell you!

Judy - Don't you find with padded coathangers that you need double the size of wardrobe to fit everything in?

K8 - I don't have a spare Richard Armitage, but I do have an M&S in Newmarket. You want me to pop in and ask for your pjs?

Jayne - that's terrible! Email me your postal address to jan at jan hyphen jones dot co dot uk and I'll send you a copy of Stage by Stage. Unless you've already got it, of course.

And I was absolutely spoiled. Santa brought me everything I wanted.

But if we're talking about unwanted... that'd be the extra 2lbs of lard from overdoing the cheese and crackers and the Lindors. I'm doing something about that next week!

I didn't get a single book either (maybe they looked at the TBR pile) but I did get beautiful earrings... :-)

So who did get Richard Armitage?

I did, however, get loads of chocolates. :o)

I didn't get crystallized fruits. I say it every year but they never turn up so I bought a box on Sunday in Waitrose, vastly reduced, and pigged the lot. Retribution fell on me yesterday but on the plus side, the diet got a good start! They were lovely while they were with me...

I got both series of Life on Mars though, so Philip Glenister is MINE.

Kate - Thanks :) BUT... how did you only manage to get an unwanted TWO pounds? I have more like seven unwanted lbs on my scales.

Liz - That's terrible. Are there any in the UK waiting for you?

Shirley - Whoever got Richard Armitage isn't saying. You think they don't trust us not to steal him? And maybe you should wander along to the local dog shelter next month and see if someone didn't want their xmas puppy?

Nicky - I haven't had crystallised fruits for years. Probably a good thing given the stroppy nature of my scales this week. Good luck with the diet. Perhaps you could watch Philip Glenister instead of eating?

I didn't get Richard Armitage either so he's not over here in Lincolnshire but I did get some books - and three (count 'em ) 3 scarves so I'm not going to be cold. I didn't get another Maine Coon kitten, no matter how hard I tried to persuade everyone that Flora needed a brother. She's the only one who agrees with me. We'll keep working on it.

Shirley, you can have my Demon Puppy if you want. She'll certainly help with all those chocolates...

Jan, I fear it is too late for matching PJs, but thanks for offering!

Someone must have got RA. But let's be reasonable: if it was me, I'd be too busy to tell you all!

Kate W - Happy New Year. TWO Maine Coons? Not sure Sid would stand for that.

Dumdad - I expect Sophie had a winter cold and didn't want you to see her with red-rimmed eyes and a hacking cough. Next year...

K8 - You've been kinda quiet recently. I think you're bluffing...