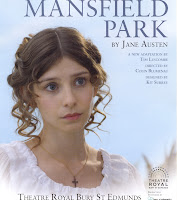 All in all, this was a fantastic production - it's on tour later this autumn, so go and see it if you possibly can.
.
Posted by Jan Jones at 08:13

Oooo I've never seen anything like this in person. Sounds fantastic!

It was indeed, Kristin!

I just saw this last night in Bath, Jan. It is brilliant-so cleverly done and so true to the book. Mary Crawford was my favourite-she is a wonderful character.

Glad you enjoyed it, Jane. The whole cast were real stars!