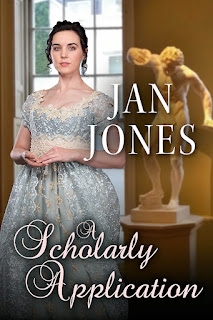 A Scholarly Application is the seventh of my Newmarket Regencies and the third in the Furze House Irregulars series featuring women of spirit, women of courage, women who don't see why, in this male-dominated Regency era, they should not also play their part in bringing wrong-doers to justice.
.
Posted by Jan Jones at 13:48