A different kind of launch! 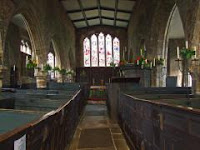 ﻿Yesterday I went to the launch of Beryl Kingston’s new novel from Hale:  Off The Rails about George Hudson of York. Born in 1800, Lord Mayor of York for three terms and known as the 'Railway King' because of his assiduity in becoming chairman of as many Railway Companies as possible, he was a colourful and not always fiscally responsible character. Indeed, his creative accounting led to his being imprisoned later on in his career.

The launch was held in York's Holy Trinity Church with its Georgian box pews, giving a semblance of privacy to the worshippers - and as we discovered, cutting off the worst of the draughts! It was lovely for me sitting in the pews and imagining what my own characters might get up to in the semi-privacy. Some of the pews were large family ones and some were a lot smaller. Certainly hands touching when sharing hymn books and feet rubbing against each other would not have been an impossibility.

Ahem. Back to Beryl's launch. The pulpit is a central one (giving a landscape feel to the church rather than a portrait one) and the ‘difference’ in this launch was that a local actor used the pulpit as a focal point for a dramatic monologue by ‘George Hudson’ himself, romping entertainingly through his timeline. I shall, of course, read the book, but the dramatic content brought the man very vividly to life and will enhance the experience.

The mulled wine and sausage rolls that followed were more than welcome on a very cold day!

[Many thanks to Holy Trinity and Mike Jarman for photographs]
.
Posted by Jan Jones at 21:01

Email ThisBlogThis!Share to TwitterShare to FacebookShare to Pinterest
Labels: outings

A wonderfully entertaining launch, and a delight to share a box pew with you! :o)

What a fun way to launch a book.

Thanks for the account...sounds a brilliant launch and now my mind is wandering to what you and Mike got up to.... :-)

Wow, I missed all of this. What a great venue for a launch... Congratulations to Beryl.